Travel delays. My flight to Atlanta was delayed 4-5 times. I was headed to the Medical Library Association (MLA) annual meeting. I made the best of my situation, strolling around the airport, getting work done on my laptop, relaxing my shoulders and my jaw (saying to myself, I cannot control this situation…) and staying hydrated. In other words, drinking water instead of coffee or beer. 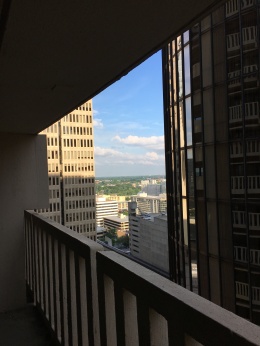 From the 17th floor.

I had purchased a ticket to go with fellow MLA attendees to the Atlanta Braves vs. Miami Marlins game. My itinerary gave me ample time to get from the airport to the hotel. As Fate would have it, I arrived at the hotel about 15 minutes after the bus departed. I ran into Sally Gore, who had her ticket in hand but had missed the bus. Did I want to get a cab with her? Tired from sitting in the Bradley International Airport since 8:30am, I declined. Mentally, I had shifted gears.

I checked into my room, unpacked my bags and headed to the lobby bar for fish tacos and a Sweetwater 420 IPA. Back in my room, I flipped through TV channels. I indulged in pre-Royal Wedding programming. Around 11:00pm (way beyond my usual bedtime), I closed my eyes and fell asleep.

I was giddy with the prospect of watching Prince Harry marry Meghan Markle. I don’t have television in my home, and I don’t regret that choice. Still, as soon as the wedding plans were announced, I knew that I wanted to watch the live proceedings. I am a sucker for the Royal Family, especially Princes William and Harry. Truth be told, as the brothers entered St. George’s Chapel and removed their hats and gloves, I began to weep. I remember watching them during Diana’s funeral. No words.

After spending the morning in my hotel room, I headed out toward the Jimmy Carter Presidential Library and Museum. I grabbed an early lunch at the Victory Sandwich Bar. This hipster eatery is nestled in a corner, just steps from the Freedom Park PATH Trail. From there, I walked to the Library. I spent 2 1/2 hours wandering through the exhibits and the grounds. Details of Jimmy Carter’s early life touched me–barefoot boy, young Naval Officer, husband of “natural girl” Rosalynn. His pride in her hula skills during the time they lived in Hawaii!!! Jimmy and Rosalynn Carter are still building on their legacy in human rights, and I honor their commitment.

I caught the MARTA bus back to downtown Atlanta in time for the MLA Opening Reception. I wandered through the Exhibit Hall, balancing small plates of delicious hors d’oeuvres while introducing myself to people that I knew virtually. Sarah Miles, fellow NNLM-er from the South Central Region. Louise McLaughlin, hospital librarian from Baton Rouge. I ran into Sally again, and we agreed to meet at 8:30pm to cheer on the Celtics in their match-up against the Cavaliers.

Hours later, Sally introduced me to Joyce Backus, Associate Director of Library Operations at the National Library of Medicine. We were sampling shrimp beignets at the White Oak Kitchen with a handful of medical librarians. We barely paid attention to the game. After quaffing my aptly named White Oak White, I headed back to my hotel room for the lousy ending of the game. Tomorrow, my conference going would begin in earnest.